Need to Order a keg for your kegerator, party or event?  We can help!

Because of the continually changing rotation of beers and the changing inventory levels at our distributors, we don’t keep an updated list of kegs available for purchase, so simply fill out the form or give us a call at 919-446-1156 and we’ll confirm pricing and availability.  We also have Keg Pumps available.

By filling out this form, we will receive your request by email and coordinate with our distributors. We will then calculate the keg cost, and contact you to determine if you would like to proceed with the order.  Please include your name, email address, phone number, the beer you are looking for and the size keg you want.  We will get back with you on the cost and availability within 24 hours.

We do require a credit card when you place your order as once the beer is received at Cellar 55, we cannot return it to the distributor.  We recommend that you allow at least a week’s lead time as not all distributors can deliver to us every day.

Please remember to bring your driver’s license with you at time of pickup.

Please note that we do charge a $50 deposit on each keg purchased.  Once  items are returned to us in good condition, we will promptly refund your deposit in the manner in which was originally paid.

A full barrel of beer, which is how breweries measure and report their output is actually 31 gallons of beer, however, there is no packaging or distribution of this quantity.

It’s important to note that most brewers will package draft beer in only two sizes:

Imported beer most often comes in 20, 30 or 50 liter sizes and selection is sometimes limited.   A UK coupler may be required for these style kegs. 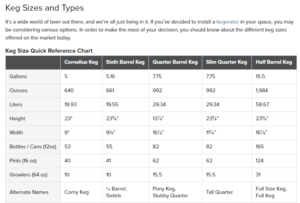